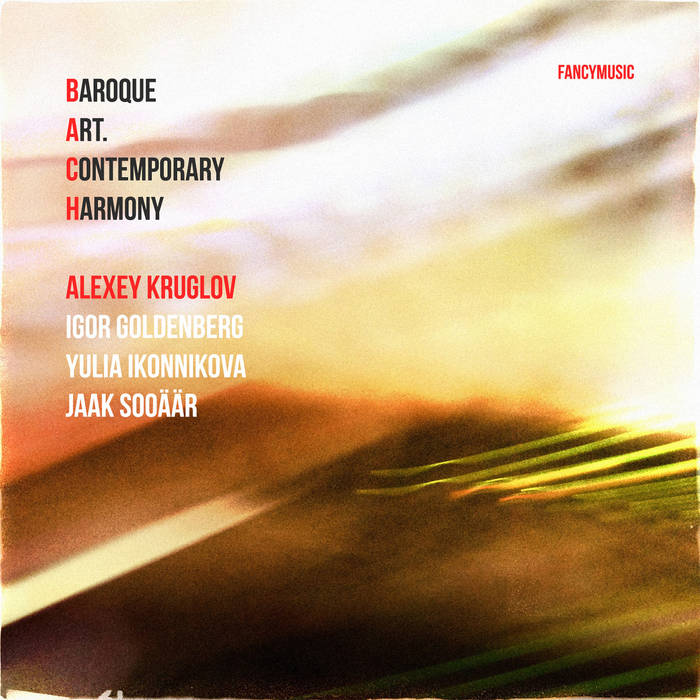 The album “Baroque Art. Contemporary Harmony” is an appeal to the creative heritage of the great Johann Sebastian Bach. The disc was recorded in collaboration with three brilliant musicians, with whom I’ve been bound by a strong friendship and fruitful cooperation for many years. Igor Goldenberg is an organist, harpsichord player, pianist and a composer. He is an author of symphonic, chamber organ and piano compositions. Yulia Ikonnikova is not only an active concert musician, but also a popularizer of organ music. She supervised the creation of several organ halls in our country. Guitarist Jaak Sooäär is a participant of numerous projects in various fields. Spheres of his creative interests range from academic music and folklore to new jazz and rock. We decided not to limit ourselves within the frames of scores, so the program is polystylistic. In this album you can hear the original material with improvisations, which are sometimes born inside it, still being sustained in the framework of clear forms of compositions; Interpretation of Bach‘s works in the style of jazz mainstream with transferring to the modal sphere; pieces based on the new-jazz idioms, with the references to the melodic fragments from Bach’s works. Three spontaneous improvisations, that have become variations on the BACH monogram, reflected in the notes of B - A - C - H, are the refrain of the album.

Bach‘s music is eternal. The findings of the ideologist of the Baroque polyphony had a huge impact on the history of music and its development. With each era the discoveries of the genius German composer are opening new dimensions. In the twentieth century, Bach‘s ideas played a major role in the development of jazz, in particular, in the formation of bebop style and the expansion of its melodic and harmonic space. For 20 years, jazz has traveled from its own Baroque to avant-garde, repeating the path of classical music, which it had been traveling through over several centuries. The new-jazz aesthetics is close to innovations of the contemporary academic music: both directions, with all their differences, are developing simultaneously, enriching each other. At the same time improvisational music rethinks the creativity of innovative composers of past years and uses their rich experience, becoming a kind of “new polyphony”. One of the main ideas of the album is to unite and show movement of the polar elements, such as traditional and experimental, clearly-verified and unpredictably-spontaneous, lyricism and expression, melodiousness and sonorism, towards each other. Although the pieces in their sequence are not connected by a single thread at first sight and represent a number of contrasting mood images, the architectonics of the album can give a holistic, multifaceted picture in which the path from Baroque to free improvisation forms an artistic line where the monogram becomes the center of the project. This monogram is treated as a special symbol, the grain of the album’s dramaturgy, a kind of code embodied even in the name of the release, a code that in all ages is considered as “contemporary harmony” and that encourages musicians to seek inspiration in Johann Sebastian Bach’s works - the greatest examples of Baroque art.